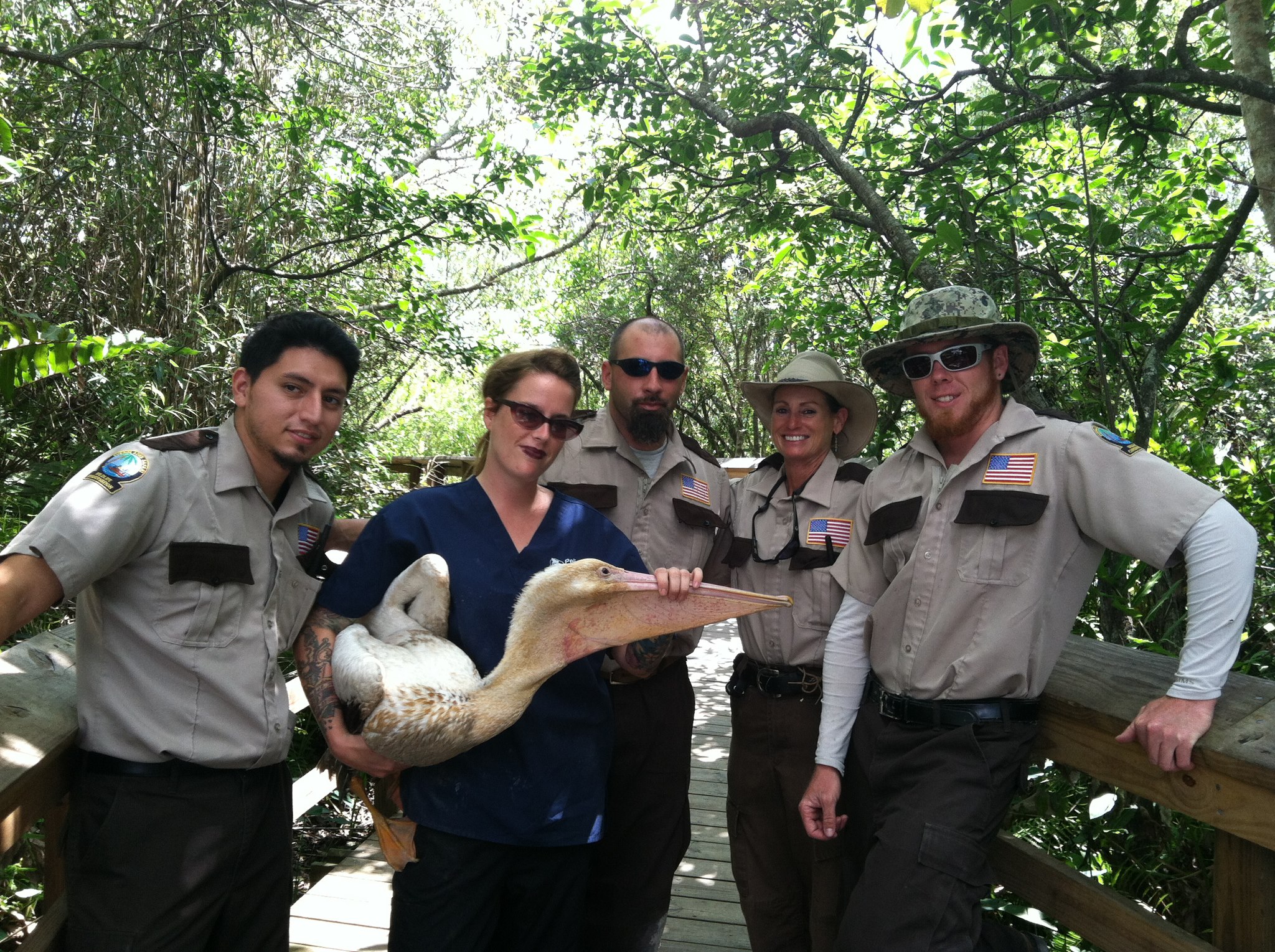 You can read more about the Juvenile Pelican rescued here: Visit Pelican Harbor

One of North America’s largest birds, the American White Pelican is distinctive for its nine-foot wingspan, conspicuous white body, and the improbable proportions of its large bill and pouch. Despite their size, the pelicans are graceful fliers, with flocks soaring high in the air and wheeling in unison. In flight, black wing tips and trailing edges are good field marks. American White Pelicans may be seen cooperatively foraging in shallow waters, or at adjacent loafing sites, where they are tolerant of human observation at a respectful distance.

American White Pelicans weigh about 16.4 pounds (7,500 grams), and measure over five feet in length, with a huge 9-foot wingspan. Sexes look similar, with short legs and tail; long, broad white wings with black tips and trailing edges; a large, heavy all-white body; and a huge pinkish to pale-orange bill and throat pouch. In breeding condition, they have a distinctive knob protruding upward from the upper mandible. Webbed feet make these pelicans strong swimmers.

The American White Pelican resides mainly in western and southern portions of North America, breeding in colonies in inland scattered locations from western Manitoba and Minnesota westward to northern California. The birds winter along the warm southern coasts of California, Mexico, the Gulf Coast, and Florida.

In breeding season, American White Pelicans are found mostly inland, nesting on isolated islands in lakes, and feeding on shallow lakes, rivers, and marshes, which may be far from nesting sites. They also breed locally on coastal islands. The birds winter mainly along coasts, in shallow, protected bays and estuaries, and on large lakes in warm climates. Migrating flocks of pelicans rest on lakes and rivers along the way.

Favored foraging sites for American White Pelicans are shallow marshes, rivers, and lake edges. The birds obtain their food by swimming along the surface, dipping their bills into the water and scooping up prey in their expandable pouches. American White Pelicans are notable for their habit of cooperative foraging—coordinated flocks of swimming birds encircle fish or drive them into the shallows where they become concentrated and are more easily caught. The birds primarily eat fish of little value to humans, as well as salamanders and crayfish. During breeding season, the birds often forage at night, locating fish by touch.

Early spring migrants may arrive at colony sites before winter ice has fully receded. Courtship begins almost immediately, with aerial flights by dozens of birds circling prospective breeding sites. Pairs may strut with heads raised and bills down, bowing deeply with their wings slightly raised. Groups of newly paired birds form dense, synchronized nesting clusters. As more birds arrive, additional sub-colonies form on nearby portions of the colony, with different clusters commonly at different stages of the reproductive cycle. Ground nests, built by both parents, are usually located on bare soil or among grasses. Nests consist of a shallow depression, surrounded by a low rim of soil, stones, and plant material. The two dull white eggs are incubated by both parents, and hatch in about a month.

Newly hatched young depend on their parents for food, warmth, and protection. By about 3 weeks of age, they become more mobile, typically joining other chicks to form large overnight crèches for protection and warmth, while parents stay at the foraging grounds, returning to the colony to feed their young. Generally only the older chick survives; the younger is often killed by its sibling. However, in years of abundance, both may fledge. Chicks first fly at about 10 weeks, and leave the colony about a week later.
Migration

While some American White Pelican populations in Texas and Mexico are permanent residents, most are migratory, moving in flocks, by day. Northern plains breeders head south to coastal lowlands. Nonbreeders, particularly in Florida, may remain on their winter range through summer. Strays may wander widely.

This information has been sourced from: audubon.org